Public Security Minister Omer Barlev ordered Police Commissioner Kobi Shabtai to prevent Israeli lawmakers from visiting the Temple Mount amid heightened tensions ahead of Ramadan and Passover – but was quickly shot down by the attorney general, according to Hebrew media.

Newly appointed attorney general Gali Baharav-Miara reportedly wrote a letter to Barlev notifying the minister that he was not authorized to make such a decision.

“You do not have the authority to order the police commissioner to prevent Knesset members from entering the Temple Mount,” she wrote. “The matter is under the supervision of the prime minister and the defense minister,” she added, noting that such a move would require a threat to national security and would need to be approved by the Shin Bet, the security service. internal security of Israel.

According to Ynet, Barlev said the police are tasked with protecting the lives of Israeli lawmakers, implying that any visit by a lawmaker to the Temple Mount is inherently dangerous.

In a statement to Channel 12 news on Tuesday night, Barlev said the report “misrepresented” his original claim, noting that he only sought to prevent lawmakers from visiting the site if there were clashes and protests. riots at some point.

“There is no doubt that the freedom of movement of members of the Knesset is absolute all year round, anywhere in the country, including on the Temple Mount,” Barlev said, reiterating his belief that the police should act to protect any MP if there is “a threat to their life.

Under Israeli law, members of the Knesset enjoy immunity from criminal prosecution for any act they perform in fulfilling their public duty. This allows them almost total freedom of movement, Baharav-Miara notes in his letter to Barlev.

Visits by Israeli lawmakers to the Temple Mount – one of the country’s most controversial sites – have long been considered controversial, and lawmakers have been turned away from the site in the past. Tensions at the holy site were seen as a key factor in the escalation of violence last year that led to the 11-day conflict between Israel and Hamas in Gaza. The site was closed to Jewish visitors for 20 days during the violence last May.

Shortly after the report, incendiary Religious Zionism MP Itamar Ben Gvir said he would visit the Temple Mount as soon as possible.

“Barlev is a frightened minister who gives in to terrorism, but more than that, he acts without authority, like the last of dictators, and must step down,” Ben Gvir said in a statement.

The MP, who has been involved in repeated scuffles in the burning district of Sheikh Jarrah in recent months, said he “will go up the Temple Mount as I am used to… Public Security Minister , even if he doesn’t like deputies visiting Temple Mount, I can’t stop him.

US and Israeli officials have warned of a possible escalation in violence as the Muslim and Jewish holidays of Ramadan and Passover are expected to converge. 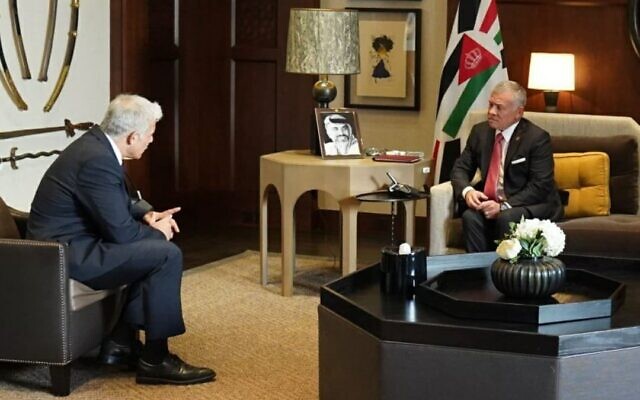 Foreign Minister Yair Lapid met Jordanian King Abdullah in Amman last week, proclaiming that “we must work together to ease tensions and promote understanding, especially as Ramadan and Passover approach.” . The Waqf of Jordan is the body that patrols the top of the Temple Mount.

Shin Bet chief Ronen Bar reportedly warned US officials during a visit to Washington over the weekend that tensions could spin out of control next month.

And a US official told The Times of Israel last month that Biden administration officials at the highest levels of the National Security Council and State Department fear developments in Jerusalem could escalate again and could spill over to the regional scale.

Following consultations with diplomats and experts on the ground, the Biden administration identified the confluence of religious holidays in April as a “recipe for disaster in Jerusalem,” a US official said.

If so, we have a request.

Every day, our journalists aim to keep you up to date with the most important developments that deserve your attention. Millions of people rely on ToI for fast, fair and free coverage of Israel and the Jewish world.

We care about Israel – and we know you do too. So today we have a question: show your appreciation for our work by join the Times of Israel communityan exclusive group for readers like you who appreciate and financially support our work.

You are a dedicated reader

We’re really glad you read X Articles from The Times of Israel over the past month.

That’s why we started The Times of Israel ten years ago – to provide discerning readers like you with must-read coverage of Israel and the Jewish world.

So now we have a request. Unlike other media, we don’t have a paywall in place. But since the journalism we do is expensive, we invite readers to whom The Times of Israel has become important to help support our work by joining The Times of Israel community.

For just $6 a month, you can help support our quality journalism while benefiting from The Times of Israel WITHOUT ADVERTISINGas well as access Exclusive content only available to members of the Times of Israel community.

Thank you,
David Horovitz, founding editor of The Times of Israel